For episode 68 of #CaseoftheWeek, we’re analyzing a decision by United States Magistrate Judge Edwin Torres in the matter of GEICO v. Gomez-Cortez. We’ll discuss when a failure to comply with a court order can lead to a default judgment on a motion for sanctions.


Good morning, and welcome to episode 68 of our Case of the Week series, published in partnership with ACEDS. My name is Kelly Twigger. I am the CEO and founder of eDiscovery Assistant, as well as the Principal at ESI Attorneys, and I’m very happy to be here with you today. Hopefully you had a fantastic Memorial Day weekend and are just sitting down to get things recombobulated for the week. Thanks so much for joining me.

As you know, on our Case of the Week series, each week, we choose a recent decision in eDiscovery that highlights key issues for litigators and those who are involved in the eDiscovery process. We try to talk about some of the practical implications of how it impacts strategy for you, your clients, and your practice.

This week’s decision comes to us from GEICO v. Gomez-Cortez, which is from the Southern District of Florida. This decision is from May 12th of 2022 (pretty recent). It was written by United States Magistrate Judge Edwin Torres. This is one of 50 decisions that Judge Torres has in our eDiscovery Assistant database. He is a very well-versed judge in eDiscovery issues and his opinions are very thoughtful. This is one that I suggest you read because it’s going to highlight one very specific point that I regularly make on the Case of the Week series, and that is the need to bring a motion to compel when another party is not behaving in discovery. All right, let’s dive in.

What are the facts here? The plaintiff here is a group of insurance companies that brought this complaint alleging that the defendant submitted fraudulent no fault insurance billing to the plaintiff. The defendant answered the complaint here, but really failed to defend the case at all. The defendants failed to appear for their depositions twice and have violated multiple court orders in the process of doing so.

The order also warned the defendants that additional violations of the Court’s directives would subject them to more severe sanctions. Here’s a quote from the Court on that:

Defendant’s failure to comply with this order may result in further sanctions under Rule 37(b) of the Federal Rules, which can include further monetary sanctions, fines, or even entry of default judgment against defendants on all claims and for all damages sought in the pending complaint. Defendant’s failure to comply may also result in their being found in contempt of court, which finding may result in the entry of an order necessary for the enforcement of the Court’s jurisdiction to coerce compliance.

At the same hearing, the Court also granted defense counsel’s motion to withdraw and ordered defendants to retain new counsel by December 16th, 2021, as well as explaining that the failure to retain substitute counsel for the corporate entity defendant or failure to file the notice of intention to defend the case on a Pro Se basis by the individual defendant may be deemed a waiver of the right to defend the action and result in the entry of default judgment.

You’ve got two separate instances here where the Court has warned the defendants that failure to comply with the Court’s orders may result in a default judgment sanction. That’s really important as we get to the analysis.

The defense never retained new counsel despite the Court’s order, and the defendant also never informed the Court of its intention to proceed with its defense on a Pro Se basis. As prescribed by the Court’s December 2nd order, plaintiff’s counsel shared with the previous defense counsel the link to defendant’s virtual depositions taking place on December 20th, but the defendant did not appear, nor did they provide any justification to the plaintiff for their absence.

The Court’s analysis begins with looking at Rule 37(b)(2)(a) which provides for sanctions following the entry of a court order and permits the Court to impose one or more of the following sanctions:

After going through that section of Rule 37, the Court also notes that it has broad discretion on sanctions and that any sanctions must be proportional to the offense that is being claimed.

The Court then notes that, “the severe sanction of dismissal or default judgment is appropriate only as a last resort when less drastic sanctions would not ensure compliance with the Court’s orders.”

Now, as the Court notes here and we’ve discussed multiple times on Case of the Week, dismissing the action or rendering a default judgment pursuant to Rule 37(b) is justified only if a party willfully or in bad faith failed to obey a court order. A dismissal or default judgment is not justified if the party’s failure to comply with the result of simple negligence, a misunderstanding, or an inability to comply. That’s very different, right? Let’s juxtapose this standard of willfulness or bad faith in failing to comply with a court order under Rule 37(b) to the intent to deprive required under Rule 37(e) on a failure to preserve standard. Two completely different issues in discovery. You want to make sure you know exactly what you’re under on Rule 37 when you’re seeking sanctions and what the pattern of behavior dictates in terms of where you can be to seek those sanctions.

The Court then looks at Rule 55 of the Federal Rules of Civil Procedure, which sets forth a two-step process for obtaining default judgment. The first step when a defendant fails to plead or otherwise defend a lawsuit, the clerk of court can authorize a default. Second, after the entry of the clerk’s default, the Court may enter a default judgment under the defendant so long as the defendant is not an infant or incompetent person.

Based on looking at Rule 55 in reviewing the defendant’s conduct, the Court found that its failure to appear constituted a willful and unjustified disregard for the Court’s orders making a sanction of default judgment appropriate. The Court notes that not only have the defendants failed to pursue their defense in this action, but they have also failed to comply with this Court’s instructions on repeated occasions and without any explanation whatsoever.

The Court also dismissed the idea that lesser sanctions were available and found that they had already been proven to be ineffective because the Court had previously ordered, as we mentioned, that the parties appear multiple times for their deposition and provide input to opposing counsel if they would not be appearing.

The Court found that anything else under Rule 37, except for an outright dismissal, would be a waste of time when it’s evident from the record that the defendants have abandoned their defense of this action and had no intention of ever complying with their discovery obligations or other requirements pursuant to the Court’s order. Now, there’s a key quote in this case that I want you to really focus on here, and this is really why I picked out this case for the Case of the Week.

We talk regularly about the need to file a motion to compel when the other party is not behaving, so that then you have the Section 37(b) available to you for violation of a court order. If you don’t move to compel, you don’t have that order. Sometimes it can be harder to get sanctions under Rule 37, and this key quote from the Court really highlights what is the 11th Circuit precedent that governs the Southern District of Florida in this case.

According to the Court:

That’s a really important quote here, because essentially the Southern District is saying, look, the 11th Circuit has said we have to have a violation of an order, and that we told the other side that they will be subject to a default judgment if they do not comply with that order. Both of those things are met here. The Court compelled the defendants to appear for their depositions, ordered them to retain new counsel by a certain date, and warned them of consequences that follow from the violation of the order. The Court also noted that while default judgment is an extraordinary remedy, it is not an abuse of discretion if the Court forewarns the party of the consequences, and the misconduct occurs anyway. As we saw from the facts here, the Court warned the defendants on two separate occasions that failure to comply with the Court’s order would result in a default judgment, and that’s what happened.

Okay, what are our takeaways from this case? Well, as I mentioned, I chose this case today, really, because of that key quote that I mentioned. Strategically, you’ve got to be prepared to move for a motion to compel discovery in order to be able to set yourself up under Rule 37(b) to be able to get sanctions. The fact pattern in this case is pretty clear that the defendants had abandoned any prosecution of their case, and it’s unlikely that you’re often going to see a case with that clear cut of facts under Rule 37(b), so the real takeaway from this case from a strategic perspective is to go and get that motion to compel or file that motion to compel when you have a legitimate basis to get a court order that you can then point to as a violation of a court order if the other side continues to fail to comply with their discovery obligations.

Okay, quick and simple, that is our Case of the Week for this week. Thanks so much for joining me. We’ll be back again next week with another decision from our eDiscovery Assistant database.

If you’re an ACEDS member and interested in using eDiscovery Assistant, there is a discount available to current ACEDS members and a trial for folks taking the ACEDS exam. Information about that can be found in your ACEDS portal. If you’re not an ACEDS member interested in using the eDiscovery Assistant database, you can either log on to eDiscoveryAssistant.com and start a free trial or you can reach out to us at support@eDiscoveryAssistant.com and we can set up a demo for you or your organization.

Thanks so much. Stay safe and healthy out there and have a great week!

#CaseoftheWeek Episode 71: Whether Declaring Your Client Incompetent Helps You Avoid a Finding of Intent

#CaseoftheWeek Episode 70: Falsification of Evidence in a Trademark Infringement Case

eDiscovery Assistant · Thursday, June 30th, 2022 at 1:55pm
@ediscoveryasst
Add episode 72 of #caseoftheweek to your weekend watch or reading list. This week's case focused on whether a party can be compelled to produce text messages from an employee’s personal mobile devices. #ediscovery #ESI #electronicdiscovery #caselaw 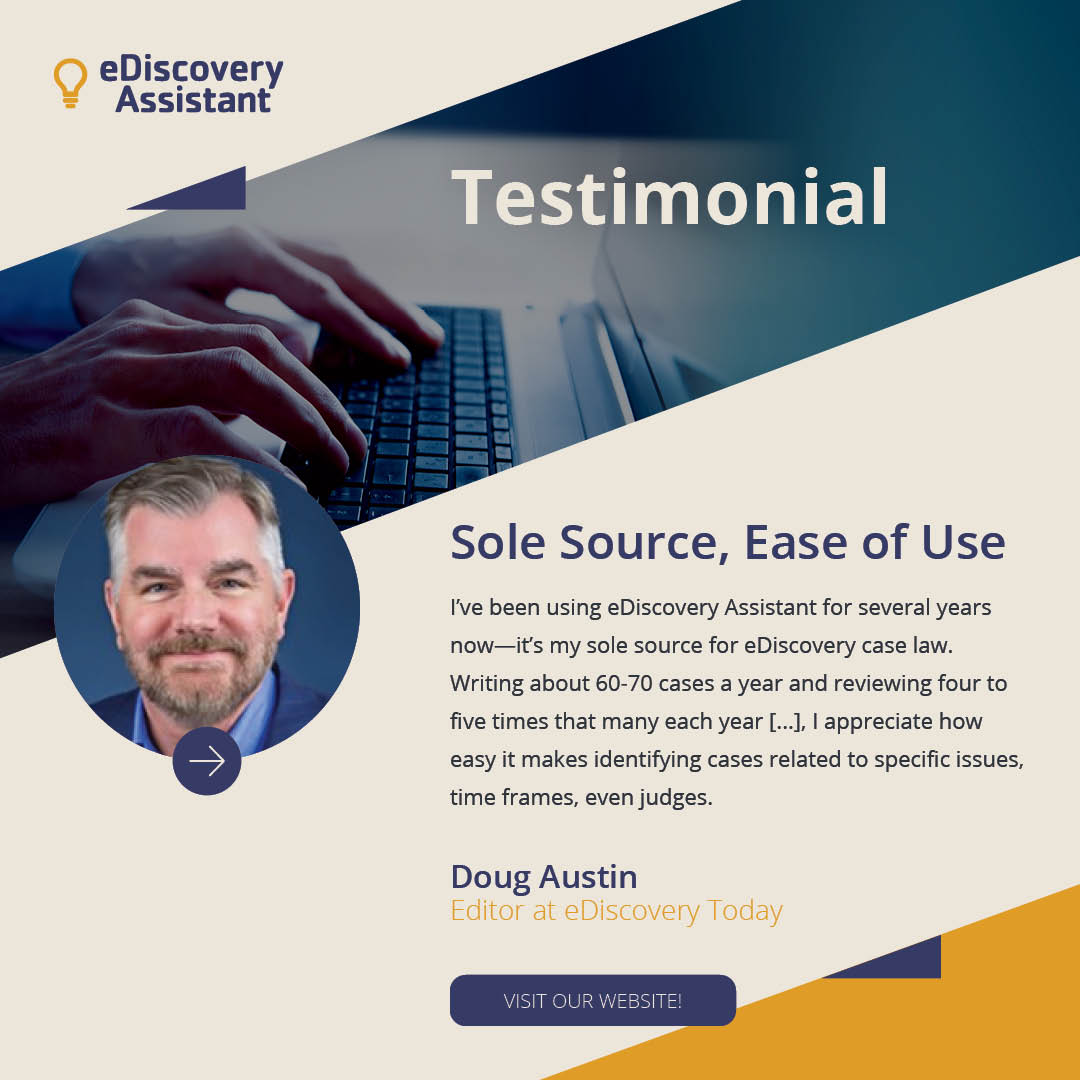